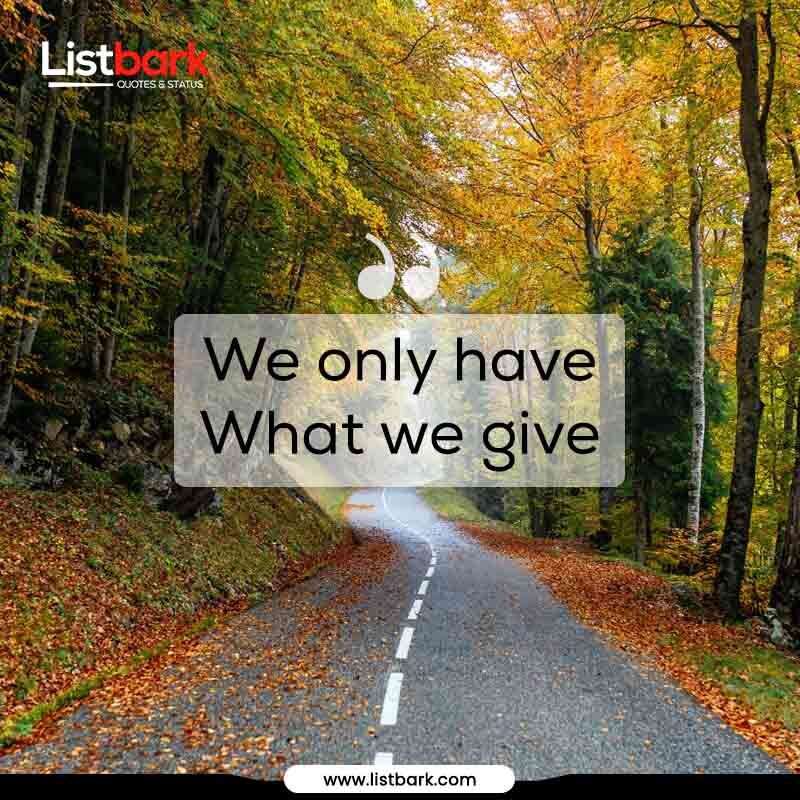 1. “This is to assuage our conscience, darling” she would explain to Blanca. “But it doesn’t help the poor. They don’t need charity; they need justice.”

2. “The library is inhabited by spirits that come out of the pages at night.”

5. “Just as Daniel Balalcazar said, it makes no sense to suffer in advance a misfortune that may never occur.”

6. “When love exists, nothing else matters, not life’s predicaments, not the fury of the years, not a physical winding down or scarcity of opportunity.”

7. “Writing is a process, a journey into memory and the soul.”

8. “The longer I live, the more uninformed I feel. Only the young have an explanation for everything.”

9. “Accept the children the way we accept trees—with gratitude, because they are a blessing—but do not have expectations or desires. You don’t expect trees to change, you love them as they are.”

10. “Music is a wind that blows away the years, memories, and fear, that crouching animal I carry inside me.”

11. “How accommodating love is; it forgives everything.”

12. “Barrabas came to us by sea, the child Clara wrote in her delicate calligraphy.”

13. “You are my angel and my damnation; in your presence I reach divine ecstasy and in your absence I descent to hell.”

14. “Writing is a constant exercise in longing.”

15. “Nostalgia is my vice. Nostalgia is a melancholy, and slightly saccharine, sentiment, like tenderness”

16. “You only have what you give. It’s by spending yourself that you become rich.”

17. “…a fixation is very stubborn: it burrows into the brain and breaks the heart. There are many fixations, but love is the worst.”

19. “Our demons lose their power when we pull them out of the depths where they hide and look them in the face in broad daylight.”

20. “Seated by her side in the narrow cabin, pressing cold compresses to her forehead and holding her while she vomited, he felt profoundly happy…” 21. “We all have an unsuspected reserve of strength inside that emerges when life puts us to the test.”

22. “She did not believe that the world was a vale of tears but rather a joke that God had played and that it was idiotic to take it seriously.”

23. “If I write something, I fear it will happen, and if I love too much, I fear I will lose that person; nevertheless, I cannot stop writing or loving…”

24. “It is common knowledge that no man that women flock to boasts of his conquests. Those who do, lie.”

25. “He had only to touch me to turn my tears into sighs and my anger to desire. How accomodating love is; it forgives everything.”

26. “…when everything else fails, we communicate in the language of the stars”

27. “It’s easy to judge others when we are not going through the same thing.”

28. “You are the storyteller of your own life, and you can create your own legend, or not.”

29. “Fear is inevitable, I have to accept that, but I cannot allow it to paralyze me.”

30. “Words are not that important when you recognize intentions.”

31. “Heroism is a badly remunerated occupation, and often it leads to an early end, which is why it appeals to fanatics or persons with an unhealthy fascination with death.”

32. “There is room in the human heart for all the divinities.”

33. “He was not oppressed by a crowd because in the midst of all the hullabaloo he always found a quiet place for his soul.”

34. “Nice people with common sense do not make interesting characters. They only make good former spouses.”

35. “For women, the best aphrodisiacs are words. The G-spot is in the ears. He who looks for it below there is wasting his time.”

36. We’ve lost our sense of ethics; we live in a world of small-mindedness, of gratification without happiness and actions without meaning.”

37. “Nothing strong can be built on a foundation of lies and omissions.”

38. “After a few months without writing, months I’ve lived turned outward… I fear going deaf, not being able to hear the silence.”

39. “He realized…that the loudest are the least sincere, that arrogance is a quality of the ignorant, and that flatterers tend to be vicious.”

40. “His calls for justice were lost at the mercy of the wind and human indifference.”

41. “Nations should be governed by a council of learned men who must answer to the people for their actions.”

42. “Just as when we come into the world, when we die we are afraid of the unknown. But the fear is something from within us that has nothing to do with reality. Dying is like being born: just a change.”

43. “Write with honesty and don’t worry about the feelings of others, because no matter what you say, they’ll hate you anyway.”

44. “Land is something one should never sell. It is the only thing left when all else is gone.”

45. “How many times have I told you not to believe everything you hear? Seek truth for yourself..”

46. “There is no light without shadow, just as there is no happiness without pain.”

48. “Society decides when we get old. But the spirit never ages.”

49. “The two moments are much alike: birth and death are made of the same fabric.

50. “She intended to swallow the world and he lived crushed by reality.”

51. “Fear is like a black cavern that is terrifying.”

52. “Be careful what you ask of Heaven; it might be granted.”

53. “Write what should not be forgotten.”

54. “Nothing changes; we humans repeat the same sins over and over, eternally.”

55. “There is no death, daughter. People die only when we forget them,’ my mother explained shortly before she left me. ‘If you can remember me, I will be with you always.”

56. “Wishes and fears are illusions… not realities. You must practice detachment.”

57. “You can tell the deepest truths with the lies of fiction.”

58. “Literary characters, like my grandmother’s apparitions, are fragile beings, easily frightened; they must be treated with care so they will feel comfortable in my pages.”

60. “They could not understand the advantage of living contrary to their inclinations in this world in order to enjoy a hypothetical well-being in another.”

61. “Courage is a virtue appreciated in a male but considered a defect in our gender. Bold women are a threat to a world that is badly out of balance, in favor of men.”

62. “Happiness is pure kitch; we come into the world to suffer and learn.”

64. “My life is about ups and downs, great joys and great losses.”

65. “And I am not one of those women who trips twice over the same stone.”

66. “The source of my difficulties has always been the same: an inability to accept what to others seems natural, and an irresistible tendency to voice opinions no one wants to hear . . .”

67. “My worst flaw is that I tell secrets, my own and everybody else’s.”

68. “Happiness is slippery, it slithers away between your fingers, but problems are something you can hold on to, they’ve got handles, they’re rough and hard.

69. “Perhaps we are in this world to search for love, find it and lose it, again and again. With each love, we are born anew, and with each love that ends we collect a new wound. I am covered with proud scars.”

70. “I have seen these persons speak unthinkingly, not realizing that to speak is also to be. Word and gesture are man’s thought. We should not speak without reason.”

71. “Memory is fiction. We select the brightest and the darkest, ignoring what we are ashamed of, and so embroider the broad tapestry of our lives.”

72. “Remember that all the others are more afraid than you.”

73. “The names of persons and living creatures demand respect, because when we speak to them we touch their heart and become a part of thier life force.”

74. “A novel is achieved with hard work, the short story with inspiration.”

75. “Before you conquer the mountain, you must learn to overcome your fear.”

76. “My father says that fear is good; it’s the body’s alarm system, it warns us of danger. But sometimes danger can’t be avoided, and then you have to forget about being afraid.”

77. “Writing is like making love. Don’t worry about the orgasm, just concentrate on the process.”

78. “Those who seek the truth run the risk of finding it.”

79. “Silence before being born, silence after death: life is nothing but noise between two unfathomable silences.”

80. “I strike the ground with the soles of my feet and life rises up my legs, spreads up my skeleton, takes possession of me, drives away distress and sweetens my memory. The world trembles.”