132 Albert Einstein Quotes For All Time 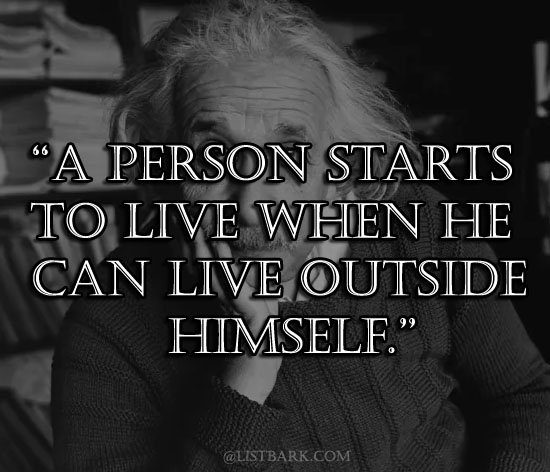 1. “Reality is merely an illusion, albeit a very persistent one.”

2. “Each of us has to do his little bit toward transforming this spirit of the times.”

3. “The man of science is a poor philosopher.”

4. “A person starts to live when he can live outside himself.”

5. “I have no special talent. I am only passionately curious.”

7. “A happy man is too satisfied with the present to dwell too much on the future.”

8. “Learn from yesterday, live for today, hope for tomorrow.”

9. “Long live impudence! It’s my guardian angel in this world.” 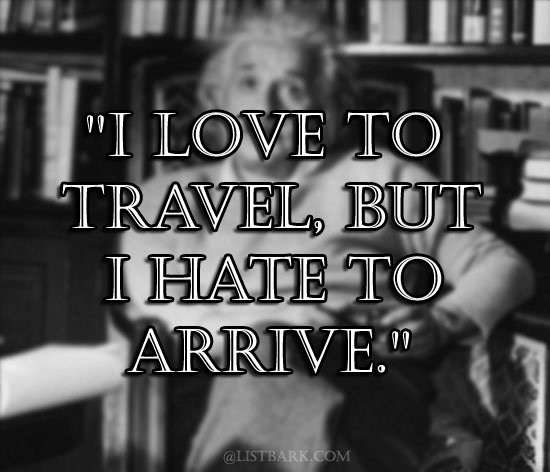 11. “Unthinking respect for authority is the greatest enemy of truth.”

12.”The search for truth is more precious than its possession.”

13. “Education is what remains after one has forgotten what one has learned in school.”

16. “As far as I’m concerned, I prefer silent vice to ostentatious virtue.”

18. “Never memorize something that you can look up.”

20. “When the solution is simple, God is answering.” 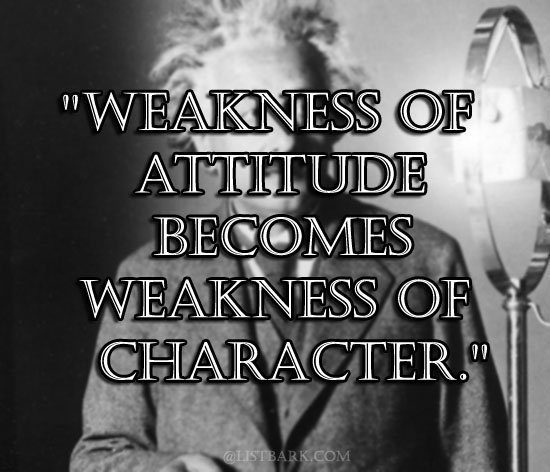 21. “The value of achievement lies in the achieving.”

24. “Truth is what stands the test of experience.”

25. “Everything should be made as simple as possible, but not simpler.”

26. “Anyone who has never made a mistake has never tried anything new.”

27. “Imagination is everything. It is the preview of life’s coming attractions.”

29. “Common sense is nothing more than a deposit of prejudices laid down in the mind before you reach eighteen.”

30. “The true sign of intelligence is not knowledge but imagination.” 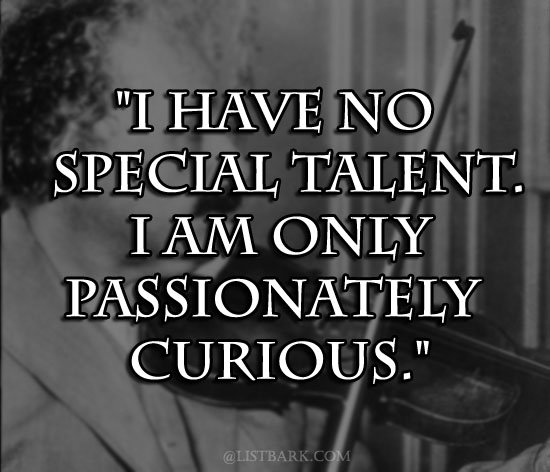 31. “A happy man is too satisfied with the present to dwell too much on the future.”

32. “A person who never made a mistake never tried anything new.”

33. “I always get by best with my naivety, which is 20 percent deliberate.”

34. “The only source of knowledge is experience.”

36. “If you are out to describe the truth, leave elegance to the tailor.”

37. “Creativity is intelligence having fun.”

38. “The only real valuable thing is intuition.”

40. “All religions, arts and sciences are branches of the same tree.” 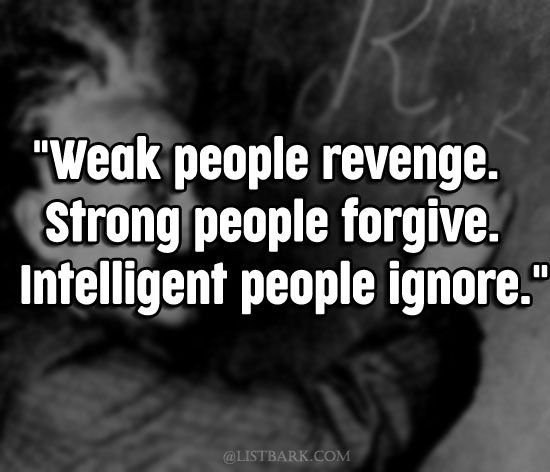 41. “Any man who reads too much and uses his own brain too little falls into lazy habits of thinking.”

44. “Science is a wonderful thing if one does not have to earn one’s living at it.”

45. “There comes a time when the mind takes a higher plane of knowledge but can never prove how it got there.”

46. “The pursuit of truth and beauty is a sphere of activity in which we are permitted to remain  children all our lives.”

47. “I believe in intuition and inspiration. At times I feel certain I am right while not knowing the reason.”

48. “The hardest thing to understand in the world is the income tax.”

50. “The only thing more dangerous than ignorance is arrogance.” 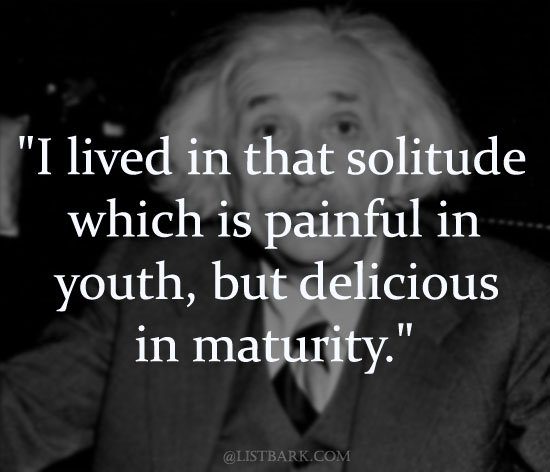 51. “Everybody is a genius. But if you judge a fish by its ability to climb a tree, it will live its whole life believing that it is stupid.”

52. “Insanity: doing the same thing over and over again and expecting different results”

53. “Do not worry about your difficulties in mathematics. I can assure you mine are still greater.”

54. “Bureaucracy is the death of all sound work.”

55. “Never memorize something that you can look up.”

56. “Two things are infinite: the universe and human stupidity; and I’m not sure about the universe.”

57. “The important thing is not to stop questioning. Curiosity has its own reason for existence.”

59. “I lived in that solitude which is painful in youth, but delicious in maturity.”

60. “The really good music, whether of the East or of the West, cannot be analyzed.” 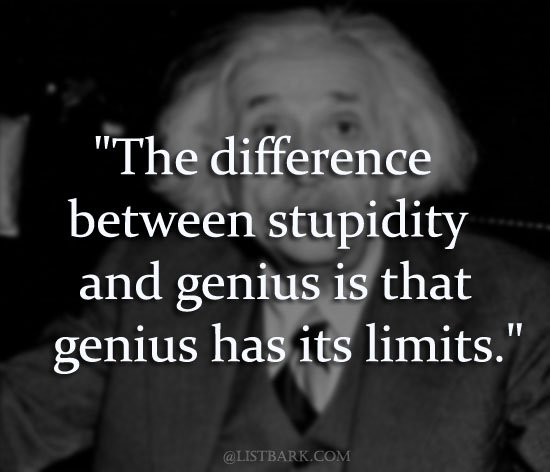 61. “We cannot solve our problems with the same thinking we used when we created them.”

62. “The difference between stupidity and genius is that genius has its limits.”

63. “If we knew what it was we were doing, it would not be called research, would it?”

64. “You can’t blame gravity for falling in love.”

65. “If you can’t explain it simply, you don’t understand it well enough.”

66. “Mankind invented the atomic bomb, but no mouse would ever construct a mousetrap.”

67. “A question that sometimes drives me hazy: am I or are the others crazy?”

68. “Two things are infinite: the universe and human stupidity; and I’m not sure about the the universe.”

69. “The value of a man should be seen in what he gives and not in what he is able to receive.”

70. “A perfection of means, and confusion of aims, seems to be our main problem.” 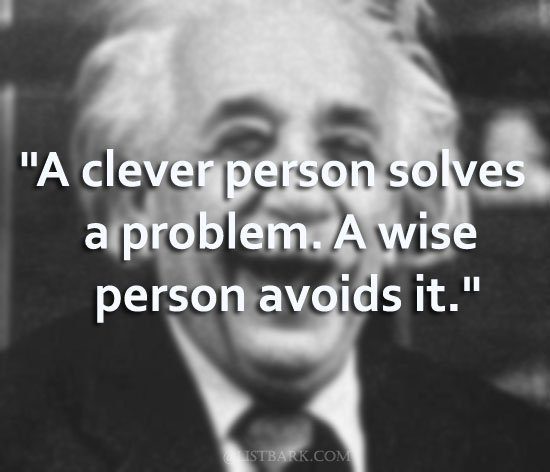 71. “A clever person solves a problem. A wise person avoids it.”

75. “A new type of thinking is essential if mankind is to survive and move toward higher levels.”

76. “Imagination is more important than knowledge. Knowledge is limited. Imagination encircles the world.”

78. “Only those who attempt the absurd can achieve the impossible.”

79. “Stay away from negative people. They have a problem for every solution.”

80. “Black holes are where God divided by zero.”

81. “Life is like riding a bicycle. To keep your balance, you must keep moving.”

82. “Unthinking respect for authority is the greatest enemy of truth.”

83. “To punish me for my contempt for authority, fate made me an authority myself.”

85. “Science without religion is lame, religion without science is blind.”

86. “If you can’t explain it to a six year old, you don’t understand it yourself.”

89. “A man should look for what is, and not for what he thinks should be.”

90. “He who can no longer pause to wonder and stand rapt in awe, is as good as dead; his eyes are closed.”

91. “Imagination is the highest form of research.”

92. “Science can flourish only in an atmosphere of free speech.”

95. “It is not that I’m so smart. But I stay with the questions much longer.”

96. “I speak to everyone in the same way, whether he is the garbage man or the president of the university.”

96. “A question that sometimes drives me hazy — am I or are the others crazy?”

98. “I believe in intuitions and inspirations. I sometimes feel that I am right. I do not know that I am.”

100. “The most powerful force in the universe is compound interest.”

101. “The only thing that interferes with my learning is my education.”

102. “You have to learn the rules of the game. And then you have to play better than anyone else.”

105. “If we knew what it was we were doing, it would not be called research, would it?”

106. “The most beautiful experience we can have is the mysterious.”

108. “He who can no longer pause to wonder and stand rapt in awe, is as good as dead; his eyes are closed.”

109. “Sometimes one pays most for the things one gets for nothing.”

110. “The important thing is to not stop questioning. Curiosity has its own reason for existing.”

112. “Look deep into nature, and then you will understand everything better.”

114. “Man usually avoids attributing cleverness to somebody else, unless it is an enemy.”

116. “I have no special talents. I am only passionately curious.”

120. “The measure of intelligence is the ability to change.”

121. “The great moral teachers of humanity were, in a way, artistic geniuses in the art of living.”

122. “Life is like riding a bicycle. To keep your balance you must keep moving.”

123. “Wisdom is not a product of schooling but of the lifelong attempt to acquire it.”

125. “Make everything as simple as possible, but not simpler.”

126. “No problem can be solved from the same level of consciousness that created it.”

128. “One flower is beautiful, a surfeit of flowers is vulgar.”

129. “Gravitation is not responsible for people falling in love.”

131. “Science without religion is lame, religion without science is blind.”

132. “Human beings must have action; and they will make it if they cannot find it.”